LULING, Tex.  Amid the dry weeds on a 470-acre ranch here, a rusted head of steel pokes up, a vestige of an oil well abandoned decades ago. Across the field stand two huge, old wooden oil tanks, one of them tilting like a smokestack on the Titanic. 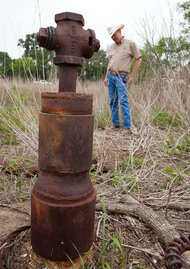 Callie Richmond for The Texas Tribune

Basically I get 61 acres here I cant do anything with, said Stuart Carter, the landowner, who is in a legal dispute with the oil producer operating on part of his ranch over who should clean up the site. Mr. Carter fears that the oil well, probably dating to the 1930s, could create a pathway for saltwater or oil to contaminate the groundwater.

Abandoned oil field equipment is a common problem in Texas, which is home to vast numbers of old wells that were never properly sealed. Some remain from the heady decades of the early- to mid-20th century, before current standards kicked in. In recent decades, regulators have worked to plug the old wells so they do not act as a conduit for liquid pollutants to enter groundwater. But some fear that the recent surge in oil drilling, brought about by the modern practice of hydraulic fracturing, will set off worrisome encounters with the old wells.

Not every unplugged well leads to pollution, but a high percentage of wells that are left unplugged do present pollution hazards, said Scott Anderson, an oil and gas expert based in Austin with the Environmental Defense Fund.

Tens of thousands of abandoned wells have been plugged using money from the Railroad Commission of Texas, which regulates oil and gas drilling, but more exist. As of late April, about 8,400 wells still need to be plugged, according to Christi Craddick, one of three elected officials who head the commission.

Clearly the industry realizes that we need to plug the wells, because they could be a pollution threat and allow underground fluids to migrate, she said, adding that the commission works to plug the most problematic old wells first.

A study prepared in 2011 for the Ground Water Protection Council based in Oklahoma cited 30 episodes from 1993 to 2008 of orphaned wells or abandoned drilling sites polluting groundwater in Texas.

The Railroad Commission estimates that two to three cases of groundwater contamination have been caused by abandoned wells since 2008, said Ramona Nye, a commission spokeswoman.

Some say hydraulic fracturing, or fracking, the process of breaking up oil or gas-rich rock by blasting water, sand and chemicals, has created additional concerns about the abandoned wells.

If the fracture intersects that unplugged well, then it could easily find a fast path up the drinking water table, said Mr. Anderson of the Environmental Defense Fund. However, many fracking operations occur below the bottom of the old wells.

Underground disposal wells, which are used to store wastewater from fracking operations, are another source of concern. The Railroad Commission requires that disposal well operators survey a quarter-mile radius around their site for non-plugged wells to ensure that pollution will not have a pathway to the surface.

Ed Walker, the general manager of the Wintergarden Groundwater Conservation District in South Texas, said that a few years ago, water came up out of an abandoned 1940s-era well that lay slightly more than a quarter-mile from a disposal well.

It was just an old, abandoned well that was bubbling up some water, and of course, the water wasnt real pretty, he said.

The Railroad Commission arrived quickly to plug the well, Mr. Walker said. There is no state list of such episodes.

The commission is expected to begin work this summer on tightening its rules for the construction of disposal wells. Mr. Walker would like disposal well operators to be required to plug abandoned wells in a wider radius, of a half-mile.

Finding the abandoned wells can be hard, and the Railroad Commission does not know where all of them are. Some metal was removed from the old wells during World War II, so they can be hard to locate, said Ralph Hoelscher, a farmer near San Angelo.

If the casings been pulled, then a metal detector doesnt do any good, he said.

Plugging old wells is expensive, and costs have risen as the oil industry gets busier, said Debbra Hastings, executive vice president of the Texas Oil and Gas Association